Elected officials determine laws that affect us – whether we vote or not, and those laws effect our ability to live out our beliefs.

Because we live in a Democratic Republic, we are given the distinct right – and privilege – to choose those who will cast votes determining how we live. 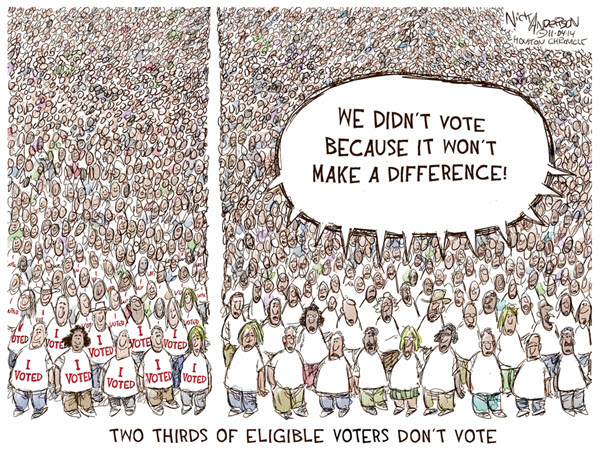 We have the power to change government. In fact, the Declaration of Independence specifically says that “governments are instituted among men, deriving their just powers from the consent of the governed.”

When was the last time you were dissatisfied with the actions of an elected government official? How about the actions of someone in government that was appointed by an elected official? You probably don’t have to think back too far. Likewise, you can most likely recall times when you were gratified by the decisions that were made. These times should be the catalyst to build our zeal to share our input at the ballot box. By arming ourselves with facts and testing those facts against prayerful reflection and Biblical values, we can be assured that we have made informed choices and exercised our right to vote regardless of the outcome.

We live with the choices that are made in elections, and the best time and place to hold our elected officials accountable is at the ballot box on election day. Far too often we see efforts to undo the results of an election through recounts, recalls, court cases even impeachments. This is a costly exercise, the 2012 effort to recall the 2010 Wisconsin gubernatorial election was the most expensive campaign ever in the state, at $63.5 million.

When “We The People” put a leader in place through an election, we collectively grant our consent over the actions they will take to govern us through the term of their office. We live with the choices made on election day. Don’t forfeit your voice in making them.

“Let us never forget that government is ourselves and not an alien power over us. The ultimate rulers of our democracy are not a President and senators and congressmen and government officials, but the voters of this country.” Franklin D. Roosevelt

President Roosevelt was right, ultimately, WE are the government. When we choose not to cast our vote in an election, we walk away from a responsibility to participate in determining who our leaders are and what message they receive from us about our expectations of how we want to be governed.

Five Ways to Spot Fake "Facts"
How to Contact Congress
Toward a Nation That is Good and Free
Why Vote?
Coronavirus Election Dates
Coronavirus and Voting
Does One Vote Matter?
Presidential Primary Coverage
Political Parties: What Do They Stand For?
How and Why We Partner
Election Ripple Effect
Watch and Pray
What We're Doing in 2019