How and Why We Partner

We’re at a national tipping point. Upcoming elections will determine what kind of America we will have for generations to come. The battle for the hearts and minds of the American people is real. Elections have consequences, and we know God has called Christians to be good stewards of their citizenship. We must put men and women in office who will take action to protect our freedom.

The only way to do this is to vote such candidates in.

iVoterGuide seeks to bring together conservative voters, business leaders, conservative organizations by equipping them to engage in impacting our culture and electing people who share our values and will fight for our freedoms.

Many church leaders have bought into the ‘separation of church and state’ and no longer feel free to educate their flock on what the Bible says about political issues, withdrawing from anything that might be potentially political and leaving voters without spiritual leadership in being good stewards of the blessing of American citizenship.

Most Christian groups that work in the political sphere focus on impacting specific legislation even though the best way to stop bad legislation is to elect good people! While there are many great Judeo-Christian conservative organizations working to preserve American values and liberties, they don’t always work together.

Getting more conservative voters to the polls is not enough. Voters need information they can trust to identify which candidates will best work to preserve their liberties. In the past, voters have had to rely on the media or candidate campaign ads for information and even then, were only educated on the top two or three races on their ballot.

Donors do what they can to support a couple candidates or PACs that sound good, with no time to carefully research each candidate’s record or understand the complicated flow of funds between political action committees. 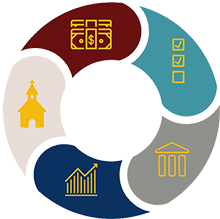 iVoterGuide seeks to do our part of equipping the body of Christ when it comes to electing Godly people by working together with the other parts of the body, making us all more effective. We educate voters with data on multiple races on the ballot, not just the top one or two, enabling them to vote wisely down to the state legislature which is the training ground for future federal officials.

By providing information on what candidates have done, not just what they say they’ll do, voters are able to distinguish fact from rhetoric and elect people who share their principles and values and will fight to preserve their freedom to share their faith and live their faith in the public square.

Donors will impact thousands of races for pennies on the dollar across the nation and down the ballot.

God set for the example of the body of Christ in 1 Corinthians 12. The eye can’t do what the foot does – and shouldn’t try. Vice versa, the foot is equipped for a specific task that the eye shouldn’t do, but when each plays their role the body is strengthened and effective. iVoterGuide works together with the other parts of the body by bringing them together to elect Godly people.

"A person has only one body, but it has many parts. Yes, there are many parts, but all those parts are still just one body. Christ is like that too."

< Political Parties: What Do They Stand For?
Election Ripple Effect >

How Did iVoterGuide Begin?
Is There A Wall of Separation Between Church and State?
Join Us in Actively Praying for 2023
The Second Most Important Thing…
The Conservative Current
How to Contact Congress
Thank You for Your Feedback!
"The Government Shall be Upon His Shoulder"
Ranked Choices and Lost Voices
What is Ranked Choice Voting?
"Duty is Ours; Results are God’s"
Join me in Petitioning God on Behalf of Our Country
Ballot Measures: What Does That Mean?
Your Freedom is Under Attack
Decoding the Left's Lies
Why Vote?
Does One Vote Matter?
Saving the Constitution
The Elephant/Donkey in the Room
Do More Than Vote
Updated Candidate Questions for Today's Issues
Take Advantage of our Candidate Questionnaires
Understanding Candidate Profiles
Judicial Candidate Evaluations
Answered Prayers
The Importance of Primary Elections
Pray for Our Country
Tribute to Richard Ford
Tools to Help You Reach Your Neighbors
Protect Our Children
Free Church Outreach Materials
What Candidate Ratings Really Mean
Importance of Panelists
The Blessings of Religious Liberty
Lessons from a Day of Infamy
A Bold Response
The First Thanksgiving
Debunking the Left’s Arguments on Abortion
How Does Redistricting Affect You?
State Powers vs. Federal Powers
Life or Death Voting
Dobbs vs Jackson
The Importance of Worldview
Pray for the Supreme Court
Why Do We Do What We Do?
20 Years Ago
Take Courage
Separation of Powers
Immigration Issues and the Bible
Supreme Court Victories
When Justice Goes Packing
Who's Winning?
The Flag is Under Attack
Five Ways to Spot Fake "Facts"
What Is the Filibuster and How Does It Work?
Saving Our Kids From CSE
Presidential Power vs. The People
School Board 101
Toward a Nation That is Good and Free
Political Parties: What Do They Stand For?
How and Why We Partner
Election Ripple Effect